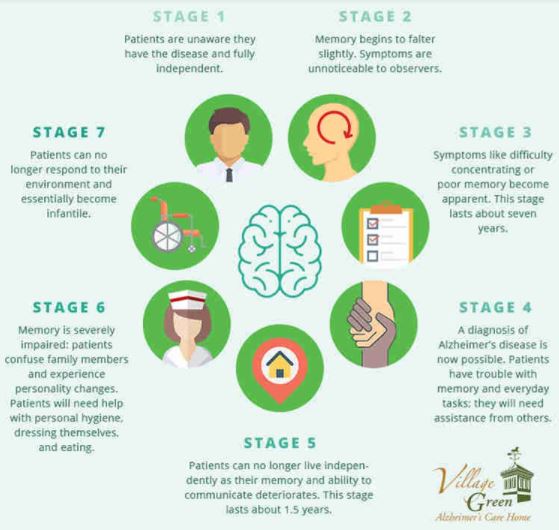 Stage 1: Alzheimer’s patients will not know they have the disease as they are fully independent. However, as mentioned before, Alzheimer’s can begin in the brain up to decades before symptoms become noticeable.

Stage 2: Patients will display normal forgetfulness for their age, but the memory of those with Alzheimer’s will decline quicker than those without. Often symptoms at this age are unnoticeable to observers, but they generally include forgetting words or misplacing objects.

Stage 3: This stage lasts about seven years, but symptoms become apparent to those close to the patient around two to four years. Patients may have trouble concentrating or forget things they just read. Some people may have to stop working.

Stage 4: A diagnosis of Alzheimer’s disease is now possible. Patients have trouble with some everyday tasks, may forget memories from their personal life, and show limited emotional responses.

Stage 5: This stage lasts 1.5 years and patients need lots of support. They will forget major events, their current address, and can no longer live independently.

Stage 6: Memory is severely impaired to the point where patients will confuse family members, experience personality changes, and become paranoid. They will also need help with personal hygiene, dressing themselves, and eating.

Stage 7: Severe Alzheimer’s has set in and occurs in phases that may last a couple years. Speech will become limited to simple sentences and may decrease to only single recognizable words. Patients may be unable to sit up on their own or hold up their head. Patients essentially become infantile.

Dementia: Time To Make Yourself Aware Of The Disease

Dementia is an umbrella term for a set of symptoms of cognitive decline lie underlying forgetfulness diseases and brain disorders. The proximity of having dementia increases with age, but it is not a normal part of aging. Stay one step ahead and know important dementia facts.

According to an analysis, “4.7 million people above 65 years of age were living with Alzheimer’s in 2010.”

Dementia affects families globally, and the number is believed to rise over the coming years. People rarely know the warning signs and look out for, or the different kinds of care only when they have been diagnosed.

Here are a few dementia facts that every individual must know:

Clearing the air of misconceptions

It’s a common misconception that dementia only affects the elderly. Thus, many times the symptoms of dementia go mistaken for other conditions in young people. Dementia is progressive. It consists of a wide number of symptoms that gradually get worse with time. Dementia straightaway affects the brain; hence it is impossible to cure any injury caused by dementia. However, if detected in earlier stages, some treatments can either slow down or prevent further injuries or damage to the brain.

Not limited to memory loss

Alzheimer’s disease is a part of dementia. Dementia is not limited to memory loss. It may affect the way individuals think, feel, speak and behave. Head trauma, Jakob disease, Huntington’s disease, and Parkinson’s disease, to name a few, all come under the umbrella of dementia. According to what part of the brain is affected, the symptoms vary. But, there are a few symptoms that are common. For instance, forgetting things on a day-to-day basis, problems in concentrating or frequent mood changes, etc.

Even though having a few of these symptoms does not state that you have dementia; however, it’s advised to consult a doctor as a precaution. There are a lot of other reasons as to why someone may show symptoms similar to dementia. Some include chest and urinary tract infections, depression, vitamin and thyroid deficiencies, and even brain tumors.

Dementia: Not a part of the natural aging

Why is it not the end of the world for people with Dementia?

Individuals who are affected with dementia can still live a happy life despite their current situation. Here is how there is much hope for affected individuals that we think:

People can live well even with dementia

Even though there is no defined cure for dementia there are still treatments that help with managing symptoms and daily life. This can help people suffering from dementia to lead an active life. Along with the drugs certain other practices can help in dealing with dementia such as discussing current affairs, solving word puzzles or creating a life story book by sharing their life’s story with nurses or caretakers, etc. Dementia patients should take up an active lifestyle that will help boost their memory and self-esteem and as a way to avoid depression.

Dementia is not the end of life

Help is always available for dementia patients. Dementia care involves medications that slow symptoms down, help with lifestyle changes and also advise the family members. Researchers are looking at the possibilities of how to prevent and diagnose dementia and how to improve the quality of life for people living with that condition. The more the people understand, the more people can help these individuals to become independent and live happily.

People living with dementia can live active and independent lives for a long time but knowing that there is support available out there, one can make the journey much more manageable.